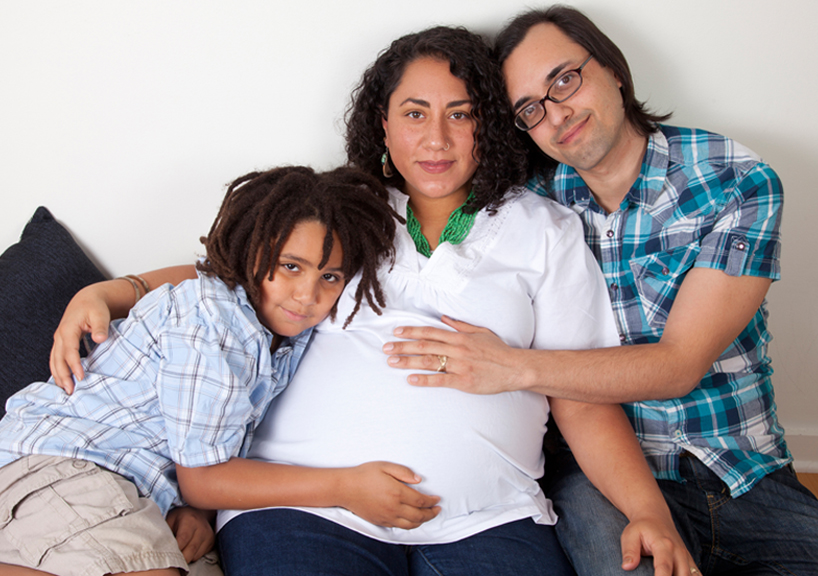 Taína was working hard to get labor going for about a week, doing everything from chiropractic to massage to prenatal yoga and acupuncture. On April 11th Taína had a midwifery appointment and after a good conversation with her midwife, decided it was time to let go and let  the baby decide when she wanted to come into the world. Taina felt a sense of relief. But she still had a chiropractic appointment, prenatal yoga class and pregnancy massage lined up for the day. As the late afternoon came, she felt a little different, but stayed in the mindset of letting go.However, a conversation with her sister that evening changed things a bit. The day before, Taína’s sister Ayana had given birth to her son Amani Angel in Binghamton, NY. The sisters were excited because Taína was also showing signs of going into labor soon. On the evening of April 11th Taína was listening to her sister tell her birth story and at one point they began to laugh very hard!  Taína thought to herself, “This laughter is going to make me go into labor”. Afterwards she fell asleep, and woke up feeling strong contractions. When she stood up, her water broke, and she knew it was time.Taína and Gaetano went up to their nest in their bedroom. Candle light from the altars lit the room as a bright half moon lit the sky. The space was serene and already full of Love.They called their birthing team: midwives Maureen and Heidi of Heartspace Midwifery, Leah, Laura and Vicky. The team arrived from various places and unique situations perfectly on time as Taína’s labor progressed into the night. The team prepared the room by filling the pool, cleansing the room with incense, and creating an attentive presence.  Each person was asked to play a special role, Leah holding the spiritual space with prayer and direct encouragement, Laura taking care of logistical needs and timing the contractions, Vicky documenting with video and photos, and of course, Heidi and Maureen spinning midwifery magic around Taina. Gaetano stayed by Taina’s side for the entire 8 hours of labor.  The only time he stepped away was when Taína asked him to play her flamenco on the guitar, helping to center her as she progressed in the labor.Taína was in the pool beginning to push when Gaetano noticed a glistening on the water and recognized it as the light of the moon reflecting into the pool. It was clear the moment was sacred. When Taina doubted herself or expressed fear the birth team encouraged her with words and touch to keep going. At one point she looked up and realized that she was completely circled in love, with Leah holding her left hand, Laura hold her right hand, Gaetano holding her shoulders, Heidi and Maureen behind her and Vicky standing close by. She felt supported enough to keep pushing in her most difficult moment.

Held by this circle, on her knees in the water, Taina gave one final push. In one fluid motion Heidi and Maureen caught the baby and passed her through Taina’s legs. Taina brought her out of the water and and onto her body. Gaetano and Taina embraced each other and Caona with deep Love and relief. Caona Assunta was born at 6:20 am as the sun rose in the sky, visible in the windows behind her. It was as if God had turned on the light, and she was here.

Gaetano cut the chord and took the baby as Taina was brought to the bed. He placed Caona on her chest and she immediately suckled on the breast. Later that morning Yabisi arrived, took his clothes off and hopped into bed with the rest of his family. Caona was home.

The Meaning of Her Name

Caona is short for Anacaona which means “Golden Flower” in Taino, the native language of Puerto Rico. It is also the name of a well known Caciqua or Taino chieftess who was known for her Areítos or poetry prayer ceremonies and died as a warrior for peace. Assunta is the name of Gaetano’s grandmother and means the Assumption of the Virgin Mary into heaven.

Gratitude
We are so thankful to all of the people that helped us to have a healthy pregnancy, labor and birth. Most importantly, we thank our midwives Maureen and Heidi for caring for us from beginning to end with so much Wisdom and Love. We are grateful to: our parents Carolyn and Mario for being our 24/7 support throughout this process; Laura, Leah and Vicky for their birth support; Betsy, Erin and Kristen of the Family Life Center for their education and physical support; and of course all of our family and friends for your Love and Prayers.
Love Taina, Gaetano, Yabisi and Caona