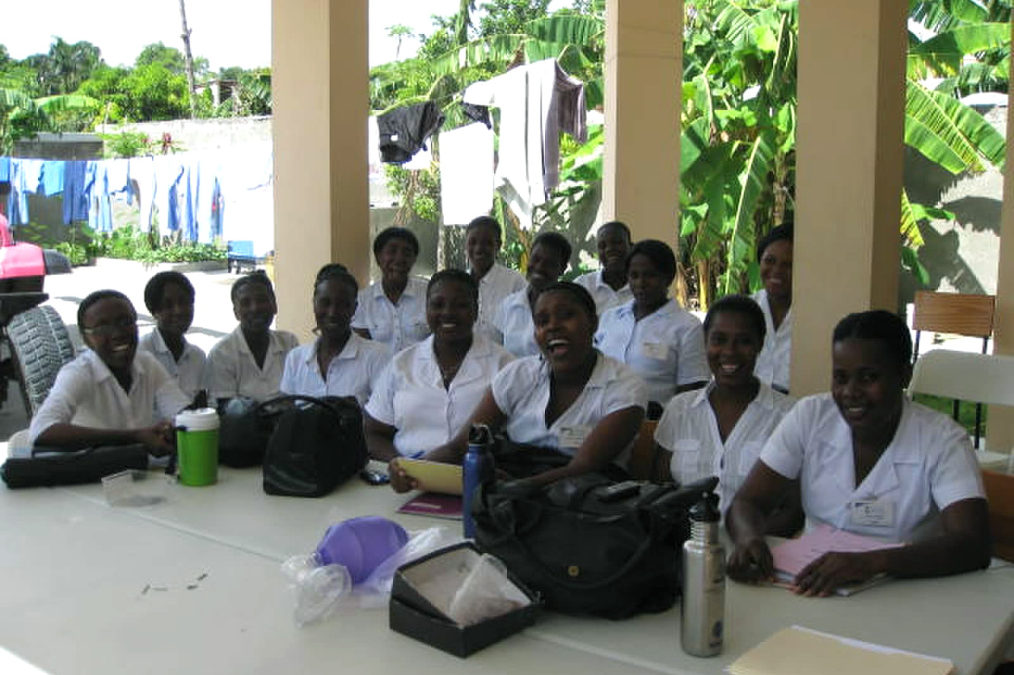 In July, I had the opportunity to travel with Midwives for Haiti to Hinche, about 60 miles northeast of Port-au-Prince. Hinche is in the central plateau region of Haiti. Although it wasn’t physically damaged in the 2010 earthquake, thousands of survivors took refuge here, looking for food and shelter. This put a huge strain on the resources of Hinche, where 80% of people already live in poverty. Pregnant women and babies are at greatest risk in conditions like these.

Midwives for Haiti was created by midwives who believe every woman in the world deserves the knowledge and care to have a safe pregnancy and birth. With education and tools, community women can make birth safer and keep babies and mothers from dying. Midwives for Haiti educates women to become skilled birth attendants to provide prenatal, birth and postpartum care to their Haitian sisters. The organization teaches a curriculum based on the World Health Organization’s statement of objectives for skilled birth attendant training to reduce morbidity and mortality rates of mothers and babies.

Haiti has the highest maternal mortality rate in the Western Hemisphere, and 76% of all births in Haiti are not attended by a skilled birth attendant. Fifteen percent of newborns have low birth weight and 25% of children suffer from chronic malnutrition.  The World Health Organization has established that professional midwives’ knowledge and skills in preventative prenatal care, complications of pregnancy and birth, and teaching nutrition are imperative to turn these statistics around.

Volunteer midwives from all over the world precept with Haitian students delivering babies in St. Therese hospital in Hinche, working in prenatal clinics, working in mobile women’s primary care clinics, and augmenting teaching in the classroom.

Midwives for Haiti began using an off-road jeep designed to enable prenatal care and skilled birth assistance for women in some of Haiti’s hardest-to-reach villages. Every week, the jeep is packed with supplies, records and medicines, accompanied by two trained midwives (graduates of the program), students and volunteer preceptors and heads out early in the morning to surrounding villages. The jeep travels an average of 2 hours each way on difficult dirt roads and trails to arrive at isolated communities.

The Ministry of Health in Haiti has recognized that long distances, inadequate transportation, and lack of information all contribute to why women do not get to medical facilities in time to save their lives. Mobile clinic serves 16 villages per month that are in greatest need within reachable distance from Hinche. At each location, the midwives see an average of 30 women per day for prenatal and postpartum visits. Medications are distributed regularly, women with risk signs are encouraged to deliver at hospital, and community health education is provided to the women.

Mobile clinic reaches over 5,000 women a year in the outlying villages of Hinche. I had the privilege of going with two Haitian midwives and a student midwife to the village of Roy Sec, near the Dominican Republic border, which took about an hour to reach. The site was a small two-room concrete building where 30 pregnant women were waiting to be seen by the midwives. I spent most of the day palpating bellies.

With help from our translator, I would describe to the mothers what part of the baby I was feeling, but often they didn’t seem to care. Out of 30 bellies that I helped to palpate that day, only 3 of those moms smiled and were interested when I described the position of their baby. From my experience, bonding with the baby is not necessarily encouraged. The Haitian midwives I spoke to suggested this was probably because there are many fetal demises and maternal deaths.

The chances of dying from childbirth in Haiti were estimated by the World Health Organization as 1 in 17, mostly due to pregnancy-induced-hypertension, eclampsia, sepsis, and postpartum hemorrhage. Pregnancy and childbirth are risky for Haitian women, and many are malnourished, therefore it can be a time of increased stress and anxiety for women.

The hospital in Hinche is free to the public, as it is funded by the government, but there are limited resources. Partners in Health have offices there and have been supplementing services as well, but it’s just not enough. There are three labor and delivery rooms, all funded and staffed by Midwives for Haiti. Often when one woman delivered there was another right there in the same room with her about to push. The postpartum room was out into the courtyard and into another part of the hospital. Shortly after a woman gives birth, the midwives help her walk over to the postpartum room for 12-24 hours. The woman’s family is responsible for bringing her food, water, sheets, mosquito nets, and rags to use for bleeding throughout her stay.  Most of the women have IV fluids near the end of labor, as they did not have enough to eat or drink in early labor. Over 50% of the population in Haiti suffers from malnutrition, and it becomes apparent in pregnancy and childbirth.

The hospital facilities are not at all what I expected. Concrete walls and floors, sometimes there is running water, sometimes not. There is no drinking water available in the hospital. Patients must bring their own, or buy it from a vendor just outside the hospital. There are no bathrooms, just make-shift bedpans. The electricity is turned off for several hours each night and midwives use headlamps to see. There are few supplies, as these midwives rely solely on the donations given to Midwives for Haiti. Some medications are accessible at the hospital’s pharmacy, but are not always available.

The first day I went to work at the hospital, the maternity ward was full with one woman in early labor, one who had just delivered, and a woman who was just about to push. There were no postpartum beds for the woman who had just given birth, so she watched as the next woman gave birth. I noticed that the midwives were not checking for heart tones on the baby, and found out the doppler they had did not have a battery and was therefore not being used, so I went to get mine and was able to hear reassuring heart tones. I stroked the mama’s forehead and told her to take a deep breath between contractions. She would.  “Mes ami, mes ami,” (“my dear, my dear” or literally, “my friend, my friend”) she complained.  I told her she was doing a good job and soon she would meet her baby. She pushed for only ten minutes and the midwife placed the baby on her chest and I assessed the baby who had great tone, color and was crying.  I tried to get the baby to suckle, but a nurse took the baby instead and did a full assessment, administered vitamin K and eye ointment, wrapped the baby in blankets and kept him on the scale on the counter, where he stayed until the mom was ready to go to postpartum.  Although this is the way all babies are handled after birth at St. Therese, I did not let that happen again while I was there. I put babies skin-to-skin on their mamas and encouraged breastfeeding just after birth. These are important survival techniques which ultimately reduces infant mortality rates in developing countries.

The girls and boys have separate living quarters. I visited the girls one afternoon and brought nail polish to paint their finger and toenails. They loved to touch my hair and hold my hand and touch my tattoo.  I pulled out my camera and we had a lot of fun taking pictures.

They took me for a tour, one girl holding my hand on one side, one on the other and then four more surrounding me and touching some part of me at every moment. There is no such thing as personal space in Haiti, and I was happy to give cuddles all around. Their house was bare, no toys, nothing hanging on the walls, but all of them had love in their hearts and smiles on their faces.

It is an incredible experience to be truly faced with your own privilege. I thought that I understood what poverty was until I visited Haiti. Although I have read about Haiti’s history of European exploitation, its corrupt politics and cruel dictators, its broken infrastructure, lack of social services and basic necessities, none of that really prepared me for this journey.  I have come to understand the true meaning of the Haitian proverb “beyond mountains there are mountains”, which not only refers to the struggles and the tumultuous history of Haiti, but more so, the perseverance and determination of the Haitian people. Once you endure one challenge or solve one problem, another is waiting. It is difficult to articulate all I have learned, and even harder to fully process it all. I am so grateful I was able to travel to Haiti and expand my knowledge of the Haitian culture, and it was truly an honor to attend to mothers and babies during birth and postpartum…..

Ore vrwa, Ayiti! Until next time!